By John Nichols for The Nation – 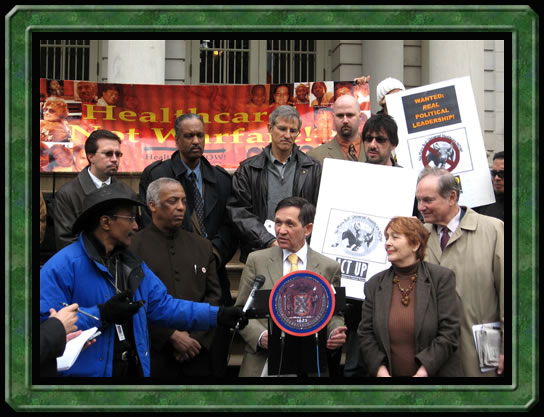 Dennis Kucinich is one of the strongest supporters of single-payer healthcare in the House. He co-sponsored HR 676 from the start. We at Healthcare-NOW! are sad to see him go and hope that he finds a way to continue his political career. See our founder, Marilyn Clement, pictured with Dennis to the left.

Ohio Congressman Dennis Kucinich, a two-time presidential candidate who for the past decade has been the most consistent critic of war and militarism in the US House of Representatives, was defeated Tuesday in a Democratic primary that pitted him against fellow progressive Marcy Kaptur.

Kucinich was the first electoral victim of the current round of redistricting, which saw congressional districts redrawn in states across the country after the 2010 Census. A Republican governor and legislature carved up northern Ohio districts with an eye toward eliminating at least one Democratic seat, and they achieved their goal by forcing Kucinich and Kaptur into the same district.

That district favored Kaptur and, after a hard-fought race she prevailed by a fifty-six to thirty-nine margin, with the remainder going to a third candidate.

Though the race in Ohio’s 9th District received scant attention compared with the Republican presidential contest in the state, the result will have national consequences.

A Congress without Dennis Kucinich will be a lesser branch. It’s not just that the loss of the former leader of the Congressional Progressive Caucus will rob the House of its most consistent critic of wars in Iraq, Afghanistan and Libya, and one its steadiest critics of corporate power.

Since he arrived on the Hill in 1997, Kucinich has been one of a handful of absolutely engaged members. When issues have arisen, be it domestic or international, low profile or high, Kucinich has been at the ready—often with the first statement, the strongest demand and the boldest plan.

A master of parliamentary procedure, and a Constitutional purist, Kucinich has given Democratic and Republican congressional leaders their share of headaches. And he has been more than willing to break with Democratic and Republican presidents on matters of principle. But even as he frustrated the most powerful players in Washington, Kucinich won an enthusiastic base of supporters who backed him for the Democratic presidential nominations in 2004 and 2008.

Though he never got near the nomination in either year, Kucinich earned high marks for forcing the other contenders to address fundamental issues of war and peace, civil liberties and trade policy. At the same time, he remained sufficiently in touch with his blue-collar Cleveland-area district—turf that had previously elected a Republican—to keep his seat in the face of primary and general election challenges from candidate backed by the political and media elites that had been after Kucinich since his days as the uncompromising “boy mayor” of Cleveland.

Had his district remained intact, Kucinich would have won Tuesday’s primary. But the 2010 election put Republican Governor John Kasich and his conservative allies in charge of the Ohio redistricting process. With encouragement from House Speaker John Boehner, they targeted Kucinich from the start. Everyone knew Kucinich was threatened, and the congressman even entertained the prospect of moving to Washington state, where he has long been a favorite of progressive activists and where population shifts had created an open seat that might be friendly to his ambitions.

Ultimately, however, Kucinich opted for a race in a redrawn Ohio district that included portions of his Cleveland base. The district also included Toledo, the home of Congresswomen Kaptur, a Democrat with whom Kucinich had frequently allied over the years.

Kucinich and Kaptur have both served in Congress as outsiders, members of the Progressive Caucus, with records of opposing wars, free-trade deals and economic policies that favor the 1 percent over the 99 percent. Both have 95 percent AFL-CIO records. Both have 100 percent ACLU records.

There were, to be sure, distinctions. Kucinich, who for many years voted with opponents of reproductive rights, switched his position before the 2004 presidential election and ran this year as the more socially liberal contender. Kaptur, the longest serving woman in the House and a champion of many feminist causes, was ranked as a “mixed choice” by NARAL Pro-Choice America.

Kucinich was always the purest anti-war champion, and he made a point of highlighting that in the race with Kaptur, a ranking member of the House Appropriations Committee, who the Cleveland congressman argued should have done much more to cut the Pentagon budget.

But Kaptur, who came to national prominence as an outspoken foe of the 2008 bank bailout, emerged as a national hero of union and community activists who shared her determination to “bust the banksters.” She was a star of the film Capitalism, a Love Story, in which she told filmmaker Michael Moore that the 2008 bailout was a “a financial coup d’état.”

Kaptur’s boldness in opposing the big banks and Wall Street, as well as her passionate advocacy on behalf organized labor, would have been missed, as well, in a Congress that needs all the economic populists it can get.

But losing Kucinich will be hard. In some of the toughest days for the American experiment as a Republican administration plotted to wage a war of whim in Iraq, Democratic “leaders” stood down. It was Dennis Kucinich who spoke up for peace and who kept speaking up with a determination that gave hope to activists across the United States and around the world.

The Republican mapmakers in Ohio may have drawn Dennis Kucinich out of his district, and out of Congress. But they will not draw him out of the history of these times. Indeed, when the story of America in the first years of the 21st century is told, Dennis Kucinich will be remembered as the rare member of Congress who opposed wars that could not be justified, who defended rights that could not be surrendered, who demanded accountability from the presidents and vice presidents who could not be allowed to have their way with the republic.