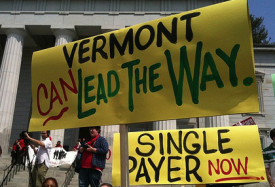 The Shumlin administration released the legislative details of how to move the state to a single payer health care system, with the first steps beginning this summer.

“We are committing to reforms that get us as many of the benefits of a single payer as possible under current federal law, and to asking for a waiver from federal law so that we can gain the full benefits of a single payer when that option is available,” Anya Rader Wallack, special assistant to Gov. Peter Shumlin for health care, told members of House and Senate panels

“I know you have been anxious to receive this proposal and get to work on the details. I also know you will find flaws in it,” Wallack said. “We don’t think we have all the answers, but we think we are putting in front of you a solid proposal for moving forward with major, meaningful health reform.”

The plan would move the state through three stages in four years to reach the target of a single-payer system.

The Shumlin administration proposes the state take two steps effective July 1: Create a health benefit exchange or marketplace called for under the federal health care law and set up a Vermont Health Reform Board to “develop payment reform and cost containment methodologies that will result in sustainable rates of growth in health care spending,” Wallack.

The next phase would begin in 2014 when the health benefit exchange begins operating. “We propose that we include in the exchange, at that time, employer groups with fewer than 100 employees,” Wallack said. “We also propose that state and municipal employees become part of the exchange, and that we integrate Medicaid, Medicare and workers’ compensation with exchange policy.”

The state would move to the final stage if and when the federal government granted Vermont waivers to establish a single, publicly financed exchange.

“At that point, current premium payments by individuals and employers in Vermont would be eliminated unless an employer chose to continue providing health insurance coverage,” Wallack said. “All Vermonters would receive coverage by virtue of their residency for a good package of health care benefits, coverage would not be linked to employment and most Vermonters would pay into an equitable system for financing this coverage.”

The bill doesn’t spell out a financing system for the third stage, but calls for continued research.