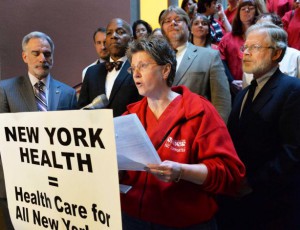 From the Times Union –

Twelve years after he first introduced a bill to promote universal health coverage in New York, Assembly Health Committee Chairman Richard Gottfried thinks Obamacare may give his cause the push it needs in 2014.

Federal officials have made successive fixes to address snags in the health law, formally the Affordable Care Act, which is intended to increase Americans’ access to health care.

“I think we are ready to refocus on real reform and real change and not just patchwork change,” Gottfried said Tuesday at the Capitol.

He stood flanked by state Sen. Bill Perkins, sponsor of a companion bill in the Senate, with a backdrop of representatives from labor unions, medical groups and the Working Families Party, who gave their support for the proposal, which is called New York Health.

While Gottfried could not say how much universal health care would cost state taxpayers, he estimated it could cut 20 percent off the more than $100 billion spent by government, private employers and individuals on services covered by the bill.

“The one thing that is certain is that money that we now spend … is dramatically more than what we would pay through New York Health,” Gottfried said.

An anti-insurance-industry refrain ran through the statements supporting the bill. Proponents of a so-called single-payer health system — under which the government is the sole purchaser of medical services — have decried the insurance industry’s influence in shaping Obamacare. The health exchanges that are at the heart of the law are government-run websites which allow individual consumers to shop for private insurance.

Dr. Frank Proscia, president of Doctors Council SEIU, a physicians union, denounced an insurance system that forces health providers to navigate a “maze of complex and counterintuitive policies” to provide care. “In a true single-payer system, all hospitals, doctors and providers would bill one entity … and the profiteers would be gone,” Proscia said.

Health care benefits have been negotiated by unions at the bargaining table, but labor representatives said they are happy to give up that contract fight to have universal coverage.

Bob Master, director of legalization/political action and mobilization for the Communications Workers of America, said employers have had the upper hand in negotiating health benefits, progressively reducing them or increasing employees’ contribution in recent years.

“All we have done in health care negotiations in the last 15 years is go backwards,” Master said.