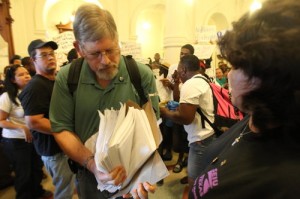 By Ken Kenegos, Healthcare for All – Texas –

On Friday September 21st, advocates for healthcare rights brought together by The Texas Organizing Project, SEIU, Good Jobs = Great Houston, Mi Familia Vota, Health Care for All Texas and others converged on the Texas State Capitol in Austin. Buses from Houston, San Antonio and Dallas brought hundreds of protesters to the office of Gov. Rick Perry to demand that he accept the expansion of Medicaid authorized by the ACA (Affordable Care Act). But the Governor was not there. Instead, a line of State Troopers stood at the door of his office and told us that it was closed.

We were bringing the Governor a petition with over 16,000 signatures gathered by the national single payer movement demanding that he and other governors stop blocking the expansion of Medicaid. The petition confirmed a commitment to securing healthcare as a human right under an improved and expanded Medicare-for-all model and stated that protecting the current expansion of Medicaid is a necessary and life-saving step in that direction. We were told that we could leave the petitions at the office door. True to our chants of “this is what democracy looks like,” we voted and decided that the petitions would be brought back when they could be given to Gov. Perry directly. 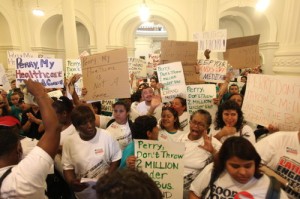 In Texas, 5.9 million people are without any health insurance, nearly one quarter of the state population – the highest percentage in the nation. Medicaid in Texas covers about 2.6 million children in poverty today, but only about 225,000 of their parents. A single parent with two children cannot make more than $308 per month and qualify for Medicaid*. That dollar-limit was set in 1985, and has never been increased or updated for inflation. No childless adults are covered unless pregnant, fully disabled, or over 65. The Medicaid expansion would cover adults with incomes up to 133% of the Federal Poverty Level ($14,900 for an individual and $30,750 for a family of 4).

But Gov. Perry says that the expansion would be an intrusion on the rights of the states. What about the rights of the people to healthcare? He says it’s too expensive because as the newly eligible adults enroll, it is projected that many currently eligible children who are not enrolled will also be brought in. This is what opponents refer to as the “woodwork affect,” comparing children who need healthcare to insects. The expansion would extend eligibility to nearly 2 million people currently shut out of access to health care. It would bring $85 billion into the Texas economy over the next 10 years. It doesn’t give us a system covering all with quality health care as Improved Medicare for All would, but it does save lives.

We marched from the Capitol, past the Governor’s mansion and eventually to the AT&T Center where Gov. Perry was addressing a conference. He was addressed from the street by hundreds of Texans determined that their message of healthcare justice be heard over political posturing. We will be back and our numbers are growing!

*If a parent is not working their maximum income cannot exceed $108 a month.