Life expectancy in the U.S. has been growing more slowly than in other developed countries and is now more than a year below the developed-country average, according to a new report (PDF) from the Organisation for Economic Co-operation and Development.

Even though Americans, on average, live to be almost 80, this is not good news. Life expectancy at birth is affected by trends in everything from infant mortality, accident rates, and violence to chronic diseases and care for the elderly, which makes it a highly sensitive indicator of a nation’s economic development. 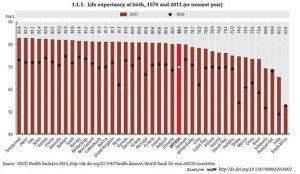 Why has the U.S. fallen off pace? The OECD report sums up some American studies by the National Research Council and the Institute of Medicine that suggest some causes. None of the theories reflect well on the U.S.:

1. The highly fragmented nature of the U.S. health system, with relatively few resources devoted to public health and primary care, and a large share of the population uninsured;

3. Adverse socioeconomic conditions affecting a large segment of the U.S. population, with higher rates of poverty and income inequality than in most other OECD countries.