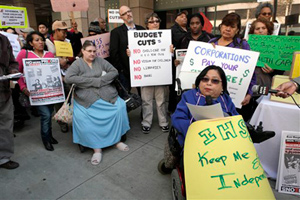 By Bill Boyarsky for Truthdig.com –

The budget cuts being proposed in state capitals around the country may sound vague and abstract, but what they boil down to are many scenes of misery. Picture, for example, an asthmatic kid waiting several hours in an emergency ward for treatment that will allow her to resume normal breathing.

Think of that child. How will she do in school if she’s constantly struggling to take a breath? And think of her school, hard hit with budget cuts that make class sizes larger while reducing the number of school days. These reductions will also hurt the college she will need to attend to prepare for a decent job.

This—and worse—shouldn’t happen in the United States. But it will, judging from last week’s reports of huge budget cuts in 31 states caused by the recession and the end of federal economic stimulus aid. Despite big deficits, only a few states are considering raising taxes or extending previous tax increases. Only one governor, in Nebraska, has proposed using reserve funds to ease the pain.

The reports were compiled by the Center on Budget and Policy Priorities, which concluded: “Cutting state services not only harms vulnerable residents but also slows the economy’s recovery from recession by reducing overall economic activity. When states cut spending, they lay off employees, cancel contracts with vendors, reduce payments to businesses and nonprofits that provide services, and cut benefit payments to individuals.”

To find out what this will mean, I called Jim Mangia, president of St. John’s Well Child and Family Center in South Los Angeles. I’d visited St. John’s last year. At that time, there was a line, extending a block or more, of patients waiting for the center to open at 8 a.m. The caseload has grown since then, Mangia told me.