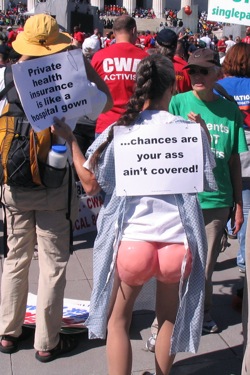 On October 2nd, Healthcare-NOW! joined with tens of thousands of progressives to add the message that we still need health care reform and we want improved Medicare for All. The crowd was wildly in favor of our message. As single-payer advocates marched up and down the reflecting pool, people cheered for the doctors, nurses, and patients who are keeping up the fight.

Jean Fox from NYC’s Private Health Insurance Must Go! Coalition, donning a hospital gown and fake plastic butt with signage that read “private insurance is like a hospital gown, chances are your ass isn’t covered!” was mobbed for photos and to sign on to the post cards to Congress supporting improved Medicare for All.

Many considered the effort a success to bring the single-payer message, finding it included in several main stream media outlets and photo blogs (see press round up below).

Activists were tabling and circulating the crowd with our message to protect social insurance programs and fight for Medicare for All. Hundreds of people signed on to the message to Congress. You can still request postcards to send the message to your Member of Congress today. We expect this fight to go into the next session of Congress as we seek to protect Medicare so that it can be improved and expanded.

Healthcare-NOW! sends a big thank you to everyone that traveled to Washington to spread the single-payer message, and to our friends at National Nurses United, Physicians for a National Health Program, Progressive Democrats of America.

Press round up for single-payer Medicare for All

Medicare for All supporters mentioned in AP article.

Healthcare NOT Welfare signs and Hands off Social Security Signs were everywhere—in fact our signs played prominently in The Washington Post (frame 5) and CNN (Frame 9).

Look at 16 minutes and again around 25 minutes.

Another interview with Dr. Margaret Flowers.

Video Clips from Dr. Steve B.