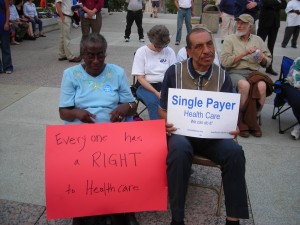 October 6, 2008 – Debby Hester of Healthcare-NOW! Nashville and PNHP in Tennessee were able to get a speaker on the Nashville rally’s agenda, and Garrett Adams of PNHP-KY accepted the spot. Then Jill Harmer from Kentuckians for Single Payer Healthcare called the rally organizers to see if she could sing the song she wrote about HR 676 and to see if there was a spot for Paul Whiteley who sang the “talking insurance blues” at our Humana demonstration in Louisville.

Both were accepted. Jill’s song is to the tune of Blowing in the Wind, and during her performance she draped a HR 676 T shirt across the lectern. She left the shirt up when she left the stage, but a rally organizer took it down.

We organized 14 people to go down from Louisville with our HR 676 T shirts. We took the HR 676 stickers and covered the crowd so that 100 people were wearing them. The only ones who refused to wear them were those on the paid staff of organizations that are not for HR 676. Everyone else liked them.

We took bright pink leaflets with a brief explanation of HR 676, a coupon to send in, and a request to call or write your Congressperson to urge him or her to sign on to HR 676. On the back of the leaflet was the list and contact information for the Tennessee representatives.

We had 300 signs printed up with “Single Payer Health Care” on the front and HR 676 on the back. We distributed the signs to those who would hold them and many did. We circulated petitions to congress for HR 676 and got about 50 signatures. We had the opportunity to talk to many people about the need for single payer and HR 676. The response was very positive.

Debby had a Healthcare-Now table and was joined by several local nurses from CNA/NNOC who passed out their HR 676 information. Dr. Sutherland from Memphis had a PNHP table with their literature. We took our banner and hung it so that all could see “Health Care is a Human Right, Support Single Payer” with the PNHP-KY and KSPH names and logos.

Garrett was the best speaker, and the crowd cheered his call for surgical removal of the insurance companies from health care and the establishment of a single payer system by passing HR 676.

We had an impact. We did the best we could to insert the single payer message.

Posted in Vigil 08 and tagged Kentuckians for Single Payer Healthcare