On November 14 and 15, 2009, 125 single-payer activists met in St. Louis, MO to hash out the strategy for building the Healthcare-NOW! (HCN) network. Despite the passing of the House bill with the Stupak amendment, and the bait and switch of the first vote in the House on single-payer, the energy for going forward was high.

For those of you who were there, and for those who couldn’t make it, we have a comprehensive report back from the panels, workshops, and resources for all to use in their single-payer advocacy.

Video from the conference is at the bottom of this page. 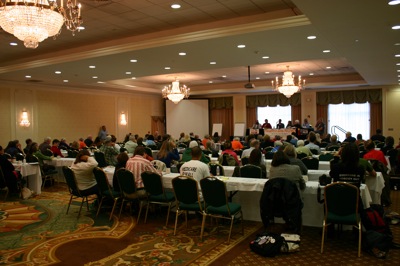 This annual conference is meant to bring together activists from across the country to build the movement. Highlights included:

1. Firm commitment to oppose the legislation in it’s current form HCN would oppose the House Bill in its current form but do so in a manner that was respectful of the diversity of views within HCN, clearly distinguishes our position from that of right-wing teabaggers and is mindful of our strategic imperative to reach out to potential allies who realize that the public option movement has reached a dead end. A committee is working on a statement to circulate to HCN activists. If you would like to contribute to this effort, please contact Jeff Muckensturm at jeff@healthcare-now.org.

2. Firm commitment to support the Sanders efforts. Along with the Mobilization for Health Care for All Campaign, we are putting together a call to action to deliver letters to Senators offices, and organizing a day of action around Human Rights Day on Dec 10th. We will be announcing more details soon.

3. 6 new Healthcare-NOW! board members! We welcome Rita Valenti, Lindy Hern, Mikuak Rai, Edith Kenna, Vashti Winterberg, and Mona Shaw to the board! Part of the new structure of HCN which was voted on at the meeting in new bylaws is to allow membership to vote on board members. We welcome these experienced activists and organizers. Board elections will happen every two years, so keep this in mind for the 2011 HCN membership meeting, so that you can run and help in the collective decision making process of HCN.

4. Michael Lighty’s presentation on the current legislation and it’s inadequacy helped shape the membership decision to oppose the bill. Download his comparison of the bills and more resources here.

5. Terry O’Neill, President of the National Organization for Women, announced her plans to roll out a national action plan for single-payer! Also, she announced plans to challenge the Stupak amendment.

7. Sandy Fox made a call to action to save our community hospitals. Reporting on the closing of Braddock Community hospital in Pittsburgh, she said their local coalition has been able to garner significant local media attention and reach a new community to support single-payer national health care. Read about their work here. To get involved with the campaign to Save our Community Hospitals, contact Dr. Anne Scheetz at annescheetz [at] gmail.com.

8. The wonderful hospitality of the Missourians for Single Payer, and having the input from so many committed activists from the area. Special thanks to them for their support.

Strategy Ideas for Healthcare-NOW! in 2010

1. Add and build new coalitions while strengthening existing ones (all methods to build local coalitions got priority status, especially working on local hospital and primary care facility closing and cut-backs)
-Go back to all of our local organizations with the info from the conference
-Draw in LGBT community
-Draw in campuses – use their energy – hold meetings on campuses
-Local vigils
-Support local hospital/primary care facility campaigns
-Add a “best practices’ page to our website
-Draw self-help health groups into our movement
-Double our membership over the next year
-Use national and regional conference calls

3. Grow understanding and support for federal level single-payer
-Don’t be afraid to talk to folks from Chambers of Commerce and AARP that may be disillusioned at this point
-Collect new stories behind HR 3962 or whatever comes out of Congress
-Force insurance industry to be transparent and report their denials
-National demonstration
-One on one house parties
-Consolidate national messaging; coordinated analysis of issue and guidelines for response – have one place for folks to get this information
-New messages that brands our values, gives human dimension to issue, avoids “socialist” problem. “Single payer” works to some degree – may not be our best label.
Perhaps something like “America’s Healthy Families Plan” (Priority—committee set up to work on this; D. Breitzman is taking the lead)
-Healthcare is a human right must be part of the messaging; tie health reform to eliminating poverty
-Tie in activists from various mobilization civil disobedience campaigns – they will help us all understand the importance of these tactics and that they aren’t that scary
Continue to target insurance companies
-Bring HCAN and Obamacare folks into the fold

4. Increase Healthcare-NOW’s national visibility
-Huffington Post, etc. work on fairer media exposure
-More visual media
-Endorse Fair Elections bills
-VOTE DOWN 3962 – support “civilized” medicine; be clear about our message in taking a position (Those present voted to take a position against HR 3269, and a large committee formed to craft the position so that our position is clear and thoughtful; Jeff M. from Healthcare-NOW staff will convene the group on-line)

Dr. Quentin Young from PNHP speaks on the panel “How To Grow the Movement to Win Single-Payer National Health Care.”

Jerry Tucker from Labor for Single Payer speaks on the panel “How To Grow the Movement to Win Single-Payer National Health Care.”

Terry O’Neill, president of National Organization for Women, speaks on the panel “How To Grow the Movement to Win Single-Payer National Health Care.”

Ethel Long Scott, Executive Director of the Women’s Economic Agenda Project, speaks on the panel “How To Grow the Movement to Win Single-Payer National Health Care.”

Tim Carpenter, Executive Director of Progressive Democrats of America, speaks on the panel “How To Grow the Movement to Win Single-Payer National Health Care.”

Michael Lighty, director of public policy for the California Nurses Association, speaks on the panel “How To Grow the Movement to Win Single-Payer National Health Care.”