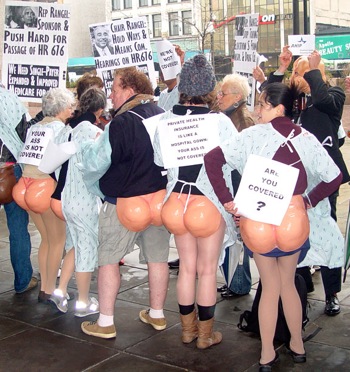 This week the Private Health Insurance Must Go! Coalition (PHIMG), including member organizations Healthcare-NOW!, and Act Up!, launched the “Not Covered Campaign” with overwhelming success.

Putting Bill Maher’s recent words into action, “Health insurance is like a hospital gown, chances are your ass isn’t covered,” bare-bottom protesters wore hospital gowns and dressed as Insurance Executives. The protesters jumped through hoops held by the insurance executives symbolizing the proverbial hoops that doctors, nurses, and patients have to go through in the current corporatized health insurance system.

PHIMG, Healthcare-NOW!, Progressive Democrats of America, and Act Up! marched in lock step on Saturday, April 4th with United for Peace and Justice and Bail Out the People through Wall St. to support strengthening the workforce by urging Congress to pass HR676, expanding Medicare into a single-payer system, to provide true universal health care to all.

On the following Monday, PHIMG brought the Not Covered Campaign to Congressman Charles Rangel’s office, whose 2008 campaign received three times the amount of campaign contributions from health insurance and pharmaceutical companies as his last run in ‘04, while conveniently not cosponsoring HR 676 for single-payer health care, as he has in the past.

The group also had a list of demands including meeting with him, cosponsoring the bill, using his power as the Chair of the Ways and Means Committee to hold single-payer health care hearings, and including single-payer advocates – not just the health insurance corporations in the national health care dialog Obama’s administration is so open to having. Barack Obama also supported single-payer health care before his run for President made his campaign the top recipient of contributions from the health insurance and pharmaceutical industry.

The group received confirmation that Rangel does support HR 676, and just hasn’t signed on yet. Advocates and constituents look forward to a long sought meeting with Rangel’s staff next week.

The Not Covered Campaign will be in full swing all summer long calling out the Congresspersons that let campaign contributions stand in the way of providing all citizens with single-payer health care – one by one. It’s critical that citizens act now and push Congress to pass HR 676 before we’re stuck with another corporate-endorsed plan that still doesn’t “cover our asses.” Join the fight! Demand nothing less than single-payer health care!

Thanks to Josh Starcher for writing this report.