Alison Landes, NLC Project Director, has sent us the following report about the resilient efforts in seeking an endorsement for HR 676 from National League of Cities.

The National League of Cities (NLC) is the oldest and largest national organization representing municipal governments throughout the United States. Working in partnership with the 49 state municipal leagues, the NLC is a resource to and an advocate for more than 19,000 cities, villages, and towns. More than 1,600 municipalities of all sizes actively participate.

Healthcare-NOW, with contributions from Floridians for Health Care (FFHC) and Physicians for a National Health Program (PNHP), sponsored and funded an effort with two primary goals: (1) win a NLC national resolution in support of HR 676; (2) inform attendees at its Annual Congress in Orlando about Healthcare-NOW’s Win-Win campaign, and the savings HR 676 could bring to local government, identifying contacts for follow-up after the conference. 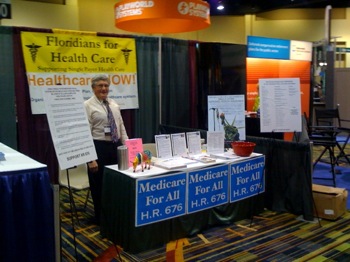 Winning a NLC resolution in support of HR 676

At its 2007 Annual Congress of Cities, the NLC passed resolution #2008-26 that states “…BE IT FURTHER RESOLVED that the federal government’s focus must include a substantial reduction in the costs that local governments and their taxpayers must bear for health care for their employees and dependents.” We wanted to build on this foundation, winning support for a more specific HR 676 support resolution.

Following the NLC process, we began contacting members of the Human Development Steering Committee, which met in Glendale, AZ in September. Several advocates on the committee engaged the others in a lively discussion, but did not win the Committee’s support. Dr. Randal C. Bruce, Council Member, City of Farmington Hills, MI and member of the H.D.Steering Committee, resubmitted the resolution to the full H.D.Policy and Advocacy Committee at the Congress in Orlando, November 11-15. This valiant effort did not get the majority of votes, but demonstrated significant support to be built upon among NLC leadership.

The NLC staff member serving as Legislative Lobbyist, present at both the Steering Committee meeting and the larger Policy and Advocacy Committee meeting seemed to hold considerable sway over the discussion and demise of the Resolution. He stood firmly on the opinion that the NLC must be open to myriad means of getting to affordable, accessible healthcare and that solely standing for H.R. 676 would “tie” his hands for negotiating in Washington, D.C.

Ongoing communications and relationships with specific NLC elected officials have identified an opportunity to win an emergency resolution at the NLC March 14-18, 2009 meeting in Washington, D.C. Dr. Paul M.Gresham, Council Member, City of Centerville, Ohio, now past chair of the HD Steering Committee, and single payer supporter, will help with this effort. We will ask Healthcare-NOW advocates to reach out to the new HD Steering Committee and HD Policy and Advocacy Committee members who could then more confidently support H.R.676 advocates within the NLC including City Council Members Dr. Paul M.Gresham, Dr. Randal C. Bruce and Betty Taylor, City of Eugene, Oregon.

Getting the word out about Healthcare-NOW’s Win-Win Campaign

Healthcare-NOW and FFHC jointly sponsored a booth at the NLC Congress of Cities in Orlando. Advocates Rick Ford, President of Floridians For Health Care, Jim Elder, FFHC Board Member, and Mark Boston, Area Vice President for Florida Alliance for Retired Americans, shared information about H.R.676, the Win-Win Campaign, and the multi-millions of dollars to be saved by cities nationwide.

Many conference attendees were unfamiliar with HR 676. Several we spoke with indicated that in understanding it more fully they will vote for it in the upcoming March meetings. Well over a hundred city officials visited the FFHC-HCN Booth, taking materials on H.R.676 and 14 committed to go back to their city councils to win endorsements from their cities. Many city officials were educated about H.R. 676 and the profound benefits it can bring to local governments nationwide. Healthcare-NOW will be contacting many of its local activists, asking them to follow-up with these NLC contacts.

REMINDER: Floridians For Health Care, in June 2008, succeeded in their effort to have The United States Conference of Mayors pass a resolution (http://www.usmayors.org/resolutions/76th_conference/chhs_03.asp) in support of H.R. 676. The resolution, still in effect, can be referenced in efforts going forward. Mayor Antonio R. Villaraigosa, City of Los Angeles, has been appointed to Obama’s Economic Advisory Board. This earlier success can be leveraged by HCN advocates reaching out to Mayor Villaraigosa, reminding him of the USCM resolution, the benefits of HR 676 and the financial wins as highlighted in the Win-Win Campaign.