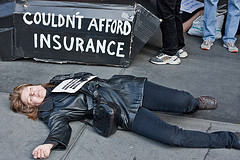 After this past weekend of horrific storms and tornadoes, it was clearly appropriate for our elected officials to declare a federal disaster in some areas. With the designation comes some federal money and help for the storm-ravaged areas and residents. Few would quarrel with our government stepping up and stepping in when so many lives and so many livelihoods have been damaged and lost. It is the right thing to do, and some suffering will be mitigated.

Over the past four years since the making of SiCKO, Michael Moore’s 2007 documentary, an estimated 45,000 people each and every year have died simply because they lacked access to healthcare. The US healthcare dead are dead not because the care wasn’t available – it just wasn’t available to them. They did not have the financial means (either the cash, credit or correct insurance coverage) to demonstrate to a healthcare provider or doctor that they should be treated and that their lives should be saved.

That’s tipping toward the quarter-million dead mark soon enough. The US healthcare dead could fill Trenton, NJ, or the Palm Springs area of California, or Daytona Beach, FL, or Canton, OH, or Boise City, ID, Rockford, IL, or Ann Arbor, MI – to name just a few of the cities with populations roughly equivalent to those killed by greed not disease or injury just since 2006 and 2007 when SiCKO was being produced and when it was released.

And the bankrupt due to healthcare crisis? That’s a tsunami of devastation raging through working families and communities where no one steps in to help. Homes and dreams are lost. Future plans are altered forever. In 2010, nearly 1.6 million people filed for bankruptcy in the US. Estimates that more than 60 percent of those who filed did so because of medical crisis would make the number of US financial casualties due to healthcare crisis a million or so every year gone broke.

Is that not a disaster with enough dead and enough suffering and enough long-term human and economic consequence in these United States to warrant a column-inch or two above the fold or radio or television coverage once in a while or a leading news position somewhere? Mainstream media? Liberal media? Anyone? Who does the daily death count? 123 dead every day. Who reports the financial death? 2,739 gone bankrupt every day. Who reports?

How much death and how much suffering will be enough to warrant our collective attention in appropriate proportion to the damage being done? Talk about a war on your own people? As far as I am concerned, we have nothing to say to other countries about human rights when we so blatantly participate in the death and pain for so many of our own.

When the nation launched into the healthcare reform debate following the 2008 elections, it seemed that patients and their families provided some good background color for the political arguments – much like the military troops and their families are sometimes used to color our discussions of military actions or patriotic devotion.

But in the direct war on working Americans that is being waged within the broken healthcare system, we now seem to have forgotten the healthcare dead and the healthcare broken. The patients and their families apparently served their intended purpose as political props, and now it’s back to business as usual. The dead keep dying and the broke keep going broke, and the money keeps flowing to the top of the healthcare food chain.

At least if we’re not going to declare this an emergency, I wish we’d at least report it as significant. 123 dead for lack of healthcare access a day in the United States in 2011. 2,739 bankrupt due to medical crisis every day in the United States in 2011. The numbers don’t lie. We do. We lie to each other when we ignore the shared reality of the torture and pain behind those numbers.

And to hear assaults on Medicare and Medicaid and any other programs that might reduce even a bit the rising tide of pain is an affront to any sense of common decency any of us might have imagined was present in our society.

If you don’t tell at least one other person today who doesn’t already know it that 123 people died today in this country not from a hole in a jet’s fuselage or an air traffic controller asleep in the tower or even due to a war or a conflict, but because we were too selfish and too greedy to change what could be changed in our healthcare system, then you don’t actually believe it’s a crisis. If we don’t count them, who will?

123 dead today. 2,739 broke today. Your fellow Americans. My fellow Americans. Every day until the day when we actually implement something different, like a progressively financed, single standard of high quality care for all without financial barriers. We know how to do it. We just haven’t demanded that a disaster be declared and that action be taken to mitigate the suffering.

Donna Smith is a community organizer for National Nurses United (the new national arm of the California Nurses Association) and National Co-Chair for the Progressive Democrats of America Healthcare Not Warfare campaign. She is also on Healthcare-NOW!’s Steering Committee.