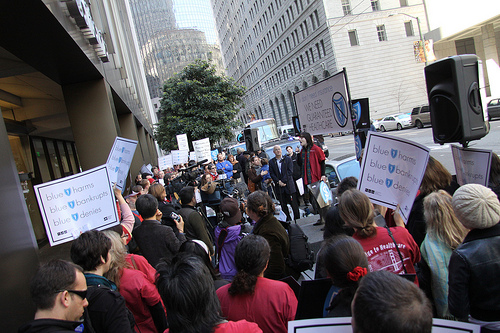 People power works, and not just in Egypt.

Blue Shield of California today announced a 60-day reprieve for the unconscionable rate hike of up to 59 percent it intends to foist on individuals and families.

Coincidence? That’s what Blue Shield insisted, even though they scurried to get out their press release the same morning they were surrounding their doors with barricades, chains, and security guards to protect their property from families facing bankruptcy with outrageous rate hikes and nurses who care for the collateral damage from insurance abuses.

No, it wasn’t hard to connect the dots here between nurses and patients turning up the heat on Blue Shield’s barricaded doorstep the same day it agreed to an all too brief reprieve in its egregious rate increase.

We can learn a lesson from the streets of Egypt and other Arab countries.

Public pressure is essential to confront tyranny, whether you are faced with political repression or corporate control of our health.

There are lives in the balance. We can’t count on legislators, regulators, courts or the lobbyists. We have to rely on the mobilization of people to stop these insurance abuses and step up the call for genuine reform, expanding Medicare to cover everyone.

Our 200 protesters cited Blue Shield’s plan to jack up premiums, and new data documenting that California insurers deny more than one-fourth of all claims. We also heard from patients who told of the devastating effect of Blue Shield’s actions.

As California Nurses Association/National Nurses United Co-President told the rally, “We are here because this is the scene of corporate crime. The bean counters upstairs don’t sit at the bedside and hold the hands of our patients.”

“A 60-day delay is a small victory, but it won’t alleviate the pain experienced by patients every day who must endure callous price increases and care denials by an industry that cares more about its bottom line than the patients it purports to serve,” said McEwen.

Here’s what two of the patients noted:

“Our insurance is completely not worth the price. We pay almost half what we pay for rent.” said Kerry Abukhalaf who brought her son to the rally. “Its just a big rip-off. We may just throw our chances to the wind and find insurance for our son and pay out of pocket for my husband and myself.”

“I’m angry. I find it really unfair that I’m forced to pay an unlimited amount to a private company. Basically, you have to pay the insurance or go away and die. Something has to change,” said Patrick Killelea, contract programmer living in Menlo Park whose rates have increased 73% in past year.
People always ask me, ‘Why are the nurses doing this?’ My response? The nurses are doing this because they are at ground zero. They see the fall out.

One example is the almost surreal rate of claims that the big insurers reject. We presented new data, which the insurers themselves report to the state Department of Managed Care, documenting that insurers denied 26 percent of all claims last year. Since 2002, these seven firms, which account for more than three-fourths of all insurance enrollees in California, have rejected 67.5 million claims.

Others joining the protest were representatives of Consumer Watchdog, the Courage Campaign, Healthcare Now, Physicians for a National Health Program, and the San Francisco Labor Council, along with other seniors, community, and healthcare activists.