Marilyn wrote a number of articles on healthcare for the site. You can read them all here. 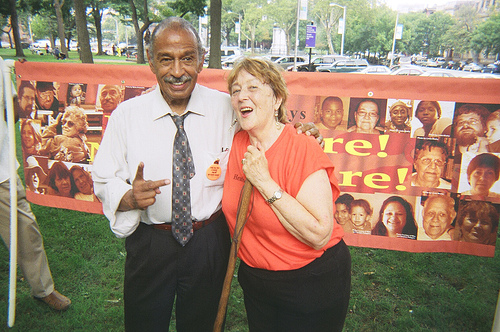 Marilyn Clement, founder and National Coordinator of Healthcare-NOW!, passed away on Monday, August 3 surrounded by her children, Scott and Pam, her daughter-in-law Liz, and the caring thoughts of all of us who knew her, worked with her, and had come to love her.

Marilyn’s life and work was dedicated to social justice. She worked tirelessly to build, speak, and spread the word about meaningful civil rights and healthcare reform. Her leadership, vision, and passion helped to strengthen the recognition of healthcare as a human right throughout the nation.

Born in Tulia, Texas, and educated at McMurray College in Abilene, Marilyn’s spark for social justice ignited in West Texas. “My parents were sharecroppers and people of faith. They were also gospel singers in the tradition of West Texas. The United Methodist Church challenged me as a youth and trained me to work for the common good,” she reminisced in one of the many talks she gave, this one in 2003. She began her career in the 60s with the Southern Christian Leadership Conference in Atlanta. She met one of her closest life-long friends in Atlanta, Margie Rece. “ We’d go to meetings together, both of us with our kids in tow. Our kids were all about the same age. What a time we had …”

She was also blessed to know and work directly with the Rev. Dr. Martin Luther King, Jr. and other civil rights leaders. The Rev. C. T. Vivian was one of them, attesting to Marilyn’s special gifts just after he learned of her death. “Marilyn was much more effective than many who came to the aid of the civil rights movement at that time. She understood racism, and she understood the suffering in the South at a deeper level than most people could. She knew how to organize people and follow through. She grasped the spiritual side of the civil rights movement, and she understood the politics of it. She never stopped being active.” Rev. Vivian credited the Methodist Church, and Methodist women in particular, for some of Marilyn’s readiness. The Methodist women in the South, he explained, were confronting racism sooner than many other faith-based organizations.

When Dr. King was under heavy criticism for speaking out against the war in Vietnam, his words made it clear to Marilyn that we cannot stand silent in the face of such injustice. “There is nothing to fear. We have drawn the line. And we have chosen to be on this side, on the side of justice. There is nothing to be afraid of. What can they do? They can kill us, yes. But still they cannot kill the justice that we stand for.”

In 1968, she and her family moved to Queens in New York City, where she connected with life-long friends and fellow activists Rev. Lucius Walker, Jr. and Peggy Billings. The Interreligious Foundation for Community Organization (IFCO) had just formed in 1967, and Marilyn served as its Associate Director from 1968-1975. IFCO was the first and only national ecumenical foundation committed exclusively to the support of community organizing, targeting oppressed communities and people of color. IFCO’s commitment to racial justice and community organizing was a perfect match for Marilyn. Rev. Walker describes Marilyn as “a friend and inspiration. She was prophetic, demanding justice without fear or inhibition.”

Much later, in 2003, Marilyn delivered a talk entitled “How I Came to Work for the Common Good.” She explained that working for the common good “is a wonderful way to live – a wonderful way to spend a lifetime. I entered that work through no virtue of my own, but through the mentoring and nurture, support and inspiration of a whole community of people all over the world… A community that taught me not to be afraid, but to live with a sense of fearlessness. It included the movement for justice in my town, my country and around the world … all taught me to be unafraid.” 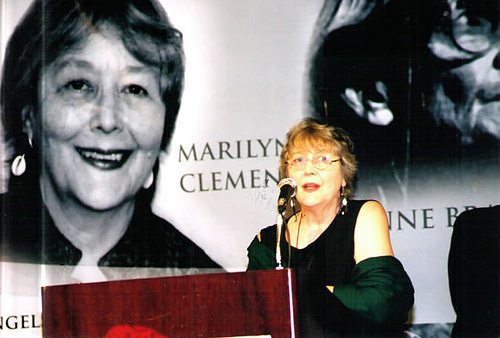 From 1976-1989, Marilyn served as the Executive Director of the Center for Constitutional Rights (CCR) in New York. As a featured speaker at CCR’s 35th anniversary event in 2002, Marilyn reflected on her time as Director. “The proudest achievement for me was the creation of the Ella Baker Student Program. I thought of it in the midst of Miss Baker’s funeral in Harlem. I was deeply moved by the dozens of leaders of the civil rights movement arrayed together all on one platform telling the story of this unsung hero, this tiny powerful woman.” Ella Baker encouraged students to lead the nation in the struggle for civil rights, sowing the seeds for the Student Non-Violent Coordinating Committee. Marilyn envisioned how CCR’s intern program could teach legal skills and pass on the history Marilyn learned at Ella Baker’s funeral. Marilyn summed up its progress, “The Ella Baker Student Intern Program succeeded and still succeeds, magnificently. Hundreds of students have trained in the program … they are scattered throughout the progressive legal landscape.”

While at CCR, and working with her friends at IFCO, Marilyn helped found the national Anti Klan Network, combining legal cases and organizing work to counter Klan and Nazi terrorism. Her colleague from the SCLC days, Rev. C.T. Vivian became the first chair of the Anti-Klan Network, later known as the Center for Democratic Renewal. This work brought her to John Conyers’ Judiciary Committee, where CCR’s founder, Arthur Kinoy, testified about Klan violence.

During the 1992-94 round of health care reform, Marilyn formed “Health Care: We Gotta Have It,” an organization of women advocating for single payer health care. It was a forerunner to Healthcare-NOW!, a broader network, formed in 2003, involving thousands of single payer activists working in local coalitions all over the country.

Marilyn’s next challenge put her in charge of the US Section of the Women’s International League for Peace and Freedom, headquartered in Philadelphia, where she lived from 1994 to 1997. Always concerned about human rights on an international scale, WILPF provided the opportunity for international organizing. She helped organize the WILPF Peace Train to the IVth International Women’s Congress in Beijing in 1995.

WILPF shared the Peace Train story On June 7, 2009 when many of us celebrated Marilyn’s work at Judson Memorial Church in New York City. “Marilyn’s enthusiasm and determination in promoting the 1995 Peace Train brought a delegation of 230 women (and 10 men) on a three week journey across Eastern Europe, Russia and the Great Steppes of China to the UN Conference on Women after stopping all along the way, meeting women of different cultures, listening to each others’ stories, then to carry the message to a gathering of women in Beijing who worked together to construct a Platform of Action which has resonated as a touchstone of activism for almost 15 years.”

She assisted the African National Congress in organizing its largest national congress just prior to the first universal suffrage election in South Africa in 1994. “We at WILPF are proud of the work Marilyn has done for the world from both inside and outside WILPF, and we celebrate her brilliance and all of her successes…..” 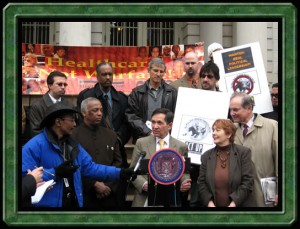 Although not new for Marilyn, healthcare organizing moved front and center when Marilyn learned that Congressman John Conyers, Jr. would introduce far-reaching single payer legislation at the start of the 108th Congress in 2003. Congressman Conyers knew that universal healthcare legislation could not advance in Congress at that time. He knew a movement would have to grow behind it. Marilyn took that call to heart. As Mark Dudzic from the Labor Party, a close friend and ally, explains it, “Back in 2003 Marilyn took this on. She knew then that this would be her legacy, advancing the fight for guaranteed national health care as far as possible for as long as she was able. We can’t thank her enough for all she gave to this cause.”

When she started, she didn’t know what a huge boost Michael Moore’s feature-length documentary, SiCKO, would give to the movement. Marilyn encouraged volunteers all over the country to greet people as they left movie theaters, signing them up to fight for single payer health care. Michael Moore used his web site to steer people to Healthcare-NOW! because he knew they would get put to work. “Marilyn Clement was a generous, compassionate and thoughtful person whose work was invaluable in organizing the grassroots movement for a single payer health care system. Even in her illness, she continued to fight tirelessly for health care justice. Before she passed away, she implored us to ‘keep up the fight.’ Now, more than ever, it is our responsibility to do exactly that.”

Marilyn served as the National Coordinator for Healthcare-NOW until her death. Doctors diagnosed her with multiple myeloma in June of 2008, and Marilyn had to step back from her leadership role at Healthcare-NOW to undergo extensive and painful treatments. A tribute to her organizing skills, a group of nine committed activists responded to her call, and stepped up to form a Steering Committee to assume leadership during her illness.

At the June 7, 2009 event at Judson Memorial Church, Marilyn’s consistent optimism rang loud and clear as she remarked to the crowd, “We are on the verge of winning something that is so desperately needed for all of our people… Love to all of you. Keep up the fight… And we are going to win single-payer healthcare.”

Michael Lighty, Public Policy Director with the California Nurses Association, came from California to attend the June 7 event, representing one of the largest national organizations supporting single payer health care. “Nurses and patient advocates mourn the passing of Marilyn Clement, who will continue to inspire us to organize for single-payer healthcare. Marilyn combined a passion for justice with the organizational skills that are necessary to turn our moral imperative into the reality of healthcare for all.  We promise to keep her spirit alive as we fight for HR 676/S 703 in Congress and wage our struggles in the states for single payer.” 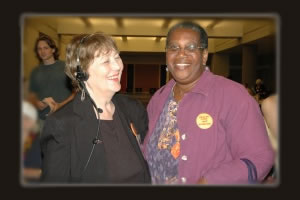 Reflecting on her life, her life long friend and colleague, Peggy Billings put it this way, “ She was a great woman and the struggle will miss her. Her loss will encourage all of us to step up and work harder for single payer and to honor her memory. I love her dearly; she was a great friend and pal.”

We remember Marilyn’s words as she commented on her lifetime of organizing for social justice: “Being an organizer is an honorable profession… Spending my life as an organizer for change in this world has been a fantastic way to spend a life, and doing it with all of you is a great way to live. As Doctor King said, the arc of history is long, but it bends toward justice.”

Healthcare-NOW! recognizes the great loss to everyone in the single-payer healthcare and human rights communities that Marilyn’s passing represents. Our resolve to continue and strengthen the movement she started is stronger than ever. As we mourn her loss, we also celebrate the amazing gifts she has given to us all.

Marilyn is survived by her brother, Les Boydstun; her children Pam and Scott; her daughter-in-law Liz Arwine, widow of her deceased son Mark; and three grandchildren – Kendall, Chelsea and Alex. Following Marilyn’s wishes, the family is planning a memorial service to be held at Judson Church on Washington Square later this fall. We will provide details when they are available.

The family suggests that those who wish to donate in Marilyn’s memory should do so to the Center for Constitutional Rights or to Healthcare-NOW!