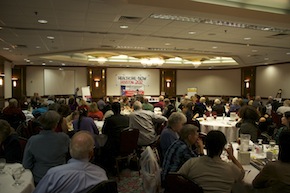 Though healthcare justice activists across the United States face similar struggles when organizing for single-payer – restricted time, resources, and capacity, classism, racism, consumerism, geographical barriers, and more – each city, state, and region also faces issues particular to its population. Our past seven conferences were held in the Northeast and Midwest, so HCN decided to address problems singular to the South by holding this year’s conference in Texas.

To kick off the conference, Cathy C. Courtney of Health Care For All Texas, Rita Valenti of Healthcare-NOW!-Georgia, and Kali Blount from FloridaWorks and the Alachua County Labor Party facilitated an “Organizing for Single-Payer in the South” meeting. 40 activists from eight different southern and southwest states attended. Participants discussed what factors influence and impede single-payer organizing in the South, and what successful strategies and tactics there are for overcoming these factors and building the movement. Major challenges include large pockets of impoverished areas, a prevailing conservative religiosity, lack of organized labor, and an enduring history of racism. [Notes from this meeting can be downloaded here.] 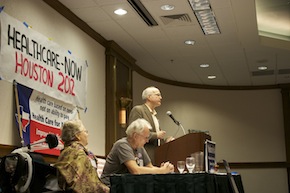 Throughout the weekend, HCN’s broad coalition of healthcare activists dedicated to universal and publicly-funded healthcare were tasked with developing goals and strategies for tackling single-payer during a presidential election year; protecting and preserving Medicare, Medicaid, and Social Security; and working with and through the Occupy Wall Street (OWS) movement.

Consensus on goals, strategies, and tactics for 2012 were decided in break-out groups following panel presentations on these three topics. The following is a summary of three important themes that arose during the course of the conference: effective messaging, coordinating efforts between states, and incorporating new skills learned from Occupy into single-payer work. (Download a full version of notes from the break-out sessions here.) 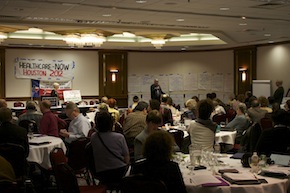 Dozens of conference attendees talked about the importance of effective messaging. Good messaging emboldens our base of support, and inspires new people to take action. Note was made of the Occupy Wall Street movement’s emphasis on the 99% – a message that bridges divides more easily than nuanced policy talk. Single-payer supporters agreed we need to educate people on why referring to our social insurance programs as “entitlements” is a misnomer, and focus on storytelling; personal stories are compelling and powerful, and more likely to be motivating. Language should also be careful, intentional, savvy, simple, and consistent. Activists underscored the significance of positive framing: we need to talk about more than how lack of healthcare kills, but how good healthcare saves lives.

Supporters concurred one of OWS’s greatest achievements was making a truly national movement bent on economic justice visible. Simultaneous coordinated actions happening all around the country effectively impacted popular discourse, and highlighted the proliferation of unemployed, uninsured, and homeless as a national problem. Activists would like to see countrywide coordinated activities around healthcare justice issues continue, and agree plugging into the Occupy network is an adept way to do so.

Further OWS practices like its mic check method of disseminating information, emphasis on participatory democracy and horizontal organizing, avoidance of hierarchical structures, and universal inclusion of participants are all tactics single-payer activists intend to further incorporate into their local organizations. We followed up with conference attendees by asking them to fill out an electronic survey about the conference. The survey was emailed to 120 participants (all the ones we had email addresses for) and 22 responded. Most respondents really liked the panels and keynote speakers as well as the break-out group format. People enjoyed any time they had to socialize, network, and make new contacts (such as at meals). All thought the cost, food, and hotel were great and most liked the location of the conference as well. However, a lot of respondents thought the agenda was too jam-packed and that there weren’t enough breaks. Most agreed there was too little free time for networking. Some people thought the break-out group questions lacked focus and/or had inadequate facilitation. Also, this was a lot of participants’ first Strategy Conference and people felt there was no space for people unfamiliar with single-payer. You can download a full description of survey responses here.

Video of each panel presentation and keynote speakers can be viewed below, and video of the closing session and southern states pre-conference meeting, as well as the protecting Medicare panel, will be available soon.

A special thank you goes out to Health Care for All TX for your amazing support in planning the conference, and to all the wonderful speakers, presenters, facilitators, and participants.

Advancing Single-Payer in an Election Year

Advancing Single-Payer in an Election Year from Katie Robbins on Vimeo.

Organizing for Single-Payer with the Occupy Wall Street Movement

Organizing for Single-Payer with the Occupy Wall Street Movement from Katie Robbins on Vimeo.