By Bennett Hall for Corvallis Gazette-Times – 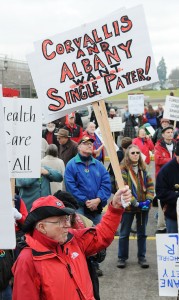 Hundreds of people from all over Oregon rallied in Salem on the first day of the legislative session to call attention to what they claim is a broken health care system and call on lawmakers to enact reforms.

Ten buses — including two from the mid-valley — delivered people from as far away as La Grande and Bandon, Ashland and Prineville for the lunchtime rally, organized by Health Care for All Oregon.

Rep. Michael Dembrow, D-Portland, got a hearty cheer as he took the stage to talk about his plans to reintroduce the Affordable Health Care for All Oregon Act, which foundered in the 2011 session.

This time, he said, the notion of a comprehensive taxpayer-supported health care system for all Oregonians has broader support, with 19 co-sponsors already on board, compared to 11 last time.

But he also predicted that a statewide ballot measure would ultimately be required to enact a single-payer system in Oregon. Using emotionally charged language, he exhorted the audience to work toward passing an initiative in the 2016 election.

Two of his co-sponsors, Reps. Jennifer Williamson of Portland and Dave Gomberg of Lincoln City, also spoke in support of the bill.

The crowd, roughly six times the size of a similar gathering two years ago to support Dembrow’s previous single-payer bill, chanted and sang, cheered and shouted for a parade of speakers lamenting the ills of private heath insurance.

Wes Brain of Ashland recounted his daughter’s nine-year struggle with leukemia — and with a succession of insurance companies that didn’t want to pay for her care.

He recently marked the fourth anniversary of her death — and began his own battle against cancer. Unlike his daughter, Brain has no insurance.

“The bills are coming in,” he said, “and I just don’t have the money to pay them.”

The Rev. Joel Miller, pastor of the Unitarian Universalist Fellowship of Corvallis, spoke of his personal conversion from a free market capitalist whose parents ran a small business to a single payer advocate who sees how runaway health care costs are crippling the economy. Now that he’s an employer himself, he said, his eyes have been opened to the shortcomings of a system that ties health care access to employment.

“The system of coverage I’m working with is expensive, inefficient and flat-out immoral,” he said. “My employees live in terror of losing their health coverage. We all live in terror.”

Between speakers, event organizer Jess Hoffman of Health Care for All Oregon urged attendees to meet personally with their local legislators and lobby for single-payer health care.

“We really want to make sure we capture the energy of this moment today,” she said, “so we can use it for the rest of the movement.”