The Republican VP nominee claims Hayek as hero. Did he miss the libertarian economist’s advocacy of universal healthcare? 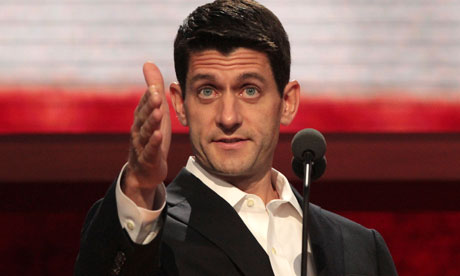 By Bernard Harcourt for the Guardian –

Where, as in the case of sickness and accident, neither the desire to avoid such calamities nor the efforts to overcome their consequences are as a rule weakened by the provision of assistance – where, in short, we deal with genuinely insurable risks – the case for the state’s helping to organize a comprehensive system of social insurance is very strong.

Surprisingly, those are the words of Friedrich Hayek, straight out of The Road to Serfdom. And I’m not pulling them out of context: Hayek firmly believed that the government should organize comprehensive systems of social insurance, including health care; should protect citizens against poverty and should ensure, for everyone, “the certainty of a given minimum of sustenance for all”.

With vice-presidential candidate Paul Ryan claiming that his ideas are inspired by Hayek and even handing out copies of The Road to Serfdom “to bring new staffers up to speed” – following the earlier highjacking of Hayek by Glenn Beck and Rush Limbaugh – it’s time for some intellectual honesty.

Others have usefully begun to discuss the tension between Paul Ryan’s politics and Hayek’s thought, as well as the internal tensions between Hayek and Ryan’s other guru, Ayn Rand. But here, for a moment, let’s go back to the primary text, open our University of Chicago Press definitive edition of The Road to Serfdom and honestly read it in relation to the American healthcare debate.

By way of background, Hayek was adamant that the central economic function of government is to organize and administer markets in such a way as to promote and protect competition. His central focus was on the neutrality of government rules – or what he called (on p117), “the Rule of Law, in the sense of the rule of formal law, the absence of legal privileges of particular people designated by authority” – not the elimination of government rules:

“The liberal argument is in favor of making the best possible use of the forces of competition as a means of coordinating human efforts, not an argument for leaving things just as they are.” (p85)

Hayek emphasized that it is a pure and simple – and highly misleading – mischaracterization of his own thought, and of liberal economic theory, to suggest that government should do nothing. “In no system that could be rationally defended would the state just do nothing”, he stressed in The Road to Serfdom (p88).

In this sense, Hayek firmly believed that the notion of a “free market” is an illusion:

“The question whether the state should or should not ‘act’ or ‘interfere’ poses an altogether false alternative, and the term ‘laissez faire’ is a highly ambiguous and misleading description of the principles on which a liberal policy is based. Of course, every state must act and every action of the state interferes with something or other.” (p118)

The key question for Hayek was whether the government rules are unbiased. Not that there be no rules, but that they be predictable and neutral – that they not favor the elites. So, for instance:

“[W]ith respect to most of the general and permanent rules which the state may establish with regard to production, such as building regulations or factory laws: these may be wise or unwise in the particular instance, but they do not conflict with liberal principles so long as they are intended to be permanent and are not used to favor or harm particular people.” (p118)

Hayek’s general theory of government was complex, and I am by no means a defender or a disciple. Personally, I believe that Hayek irrationally clung to a notion of natural order – what he called “spontaneous order” – that blinded him to the humanly-constructed nature of the wealth distributions that occur under conditions that he called “competitive”. As a result, Hayek himself fell in the cold war trap, instead of working out the full implications of his own economic theory. Hayek made naturalistic assumptions in the economic realm – about the naturalness of skill and talent, and about natural order – that belong in churches and temples, not in political economy.

But one thing is clear: as applied to the more specific issue of healthcare, Hayek favored a robust notion of security that included “security against severe physical privation” and “the certainty of a given minimum of sustenance for all” (p147). Hayek was adamant about this. “There is no reason why in a society which has reached the general level of wealth which ours has attained,” Hayek wrote, on the next page. “[This] kind of security should not be guaranteed to all without endangering general freedom.” He continued, “there can be no doubt that some minimum of food, shelter, and clothing, sufficient to preserve health and the capacity to work, can be assured to everybody.” And for Hayek, this extended to healthcare:

“Nor is there any reason why the state should not assist the individuals in providing for those common hazards of life against which, because of their uncertainty, few individuals can make adequate provision.”

Hayek recognized that the provision of healthcare is complex and that we may disagree as to the exact structure of the assistance necessary:

“But there is no incompatibility in principle between the state’s providing greater security in this way and the preservation of individual freedom.” (p148)

Hayek did not subscribe, in his own words, to a “dogmatic laissez faire attitude” (p85). He believed in rules “to limit working hours or to require certain sanitary arrangements”, and believed they were “fully compatible with the preservation of competition” (p86). He added on the next page:

“Nor is the preservation of competition incompatible with an extensive system of social services – so long as the organization of these services is not designed in such a way as to make competition ineffective over wide fields.”

I could go on, but I sense you’ve gotten my point by now. It’s important to read a thinker like Friedrich Hayek closely and honestly – never to idolize, nor to simplify and certainly never to highjack. Equally important, I believe, is to keep a critical perspective, to identify their hidden assumptions, to challenge them when they take a leap of faith. There would be a lot more to say about that and much to contest in Hayek – but it would have to start, at a minimum, from an honest and close reading.

For now, I propose that we close with another interesting passage:

“Wherever communal action can mitigate disasters against which the individual can neither attempt to guard himself nor make provision for the consequences, such communal action should undoubtedly be taken.” (p148)

I hope that staffers from both presidential campaigns will ponder those words. It would actually militate in favor of more universal healthcare than the Affordable Health Care Act now provides.