A message from our Critical Mass friends. 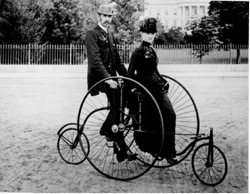 GOOD SIRS! MADAMS! AND ALL OTHERS!

One must VIGOROUSLY VOYAGE on one’s VICTORIAN VELOCIPEDE to the CRITICAL MASS, the LAST FRIDAY OF THE MONTH, MAY 28TH, at 5 POST MERIDIAN TIME—just after tea—at THE CITY HALL, in PHILADELPHIA, PA. There, HER MAJESTY’S subjects will demand, quite politely, that a SINGLE PAYER SYSTEM OF HEALTH be instituted for all the PEOPLES OF THE EMPIRE. CHEERS!

As our message is that private health insurance is rather…um…antiquarian…we suggest the wearing of bowler hats, long skirts, mustachioed faces, and other Victorian dandy-wear to make our protest heard, most clearly.

HEAR! HEAR! BICYCLING IS GOOD FOR YOU; THE INSURANCE INDUSTRY IS NOT.
GOD SAVE THE QUEEN! LONG LIVE HER MAJESTY, EMPRESS OF INDIA!

WHAT SHOULD WE DO ABOUT THE HEALTH CARE CRISIS?
WE NEED A SINGLE PAYER SYSTEM.

A single-payer system covers all people in the U.S., without exceptions.