Why are Americans distorting the reality of Canada’s most prized social program?

By Alastair Rickard for the Toronto Star – 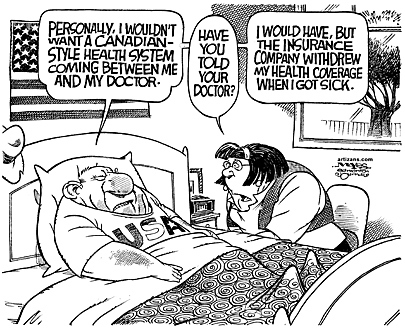 Earlier this year, before the political battle over health-care reform in the U.S. reached its current fever pitch, I was in Tuscaloosa answering questions from University of Alabama business students.

They were interested in my views, as a Canadian and as a former insurance company executive, about what they had been told about the Canadian health-care system.

My impression was that much of what they had heard had been the sort of right-wing, special interest nonsense that has subsequently characterized the health-care reform debate in the United States.

I told them that Canadians value their single-payer government health-care system so strongly that any change that appears to pose a threat to it is the third rail of Canadian politics; that most Canadians value the system’s quality of care; and that although many do still complain about wait times to see specialists in certain fields, government has moved to address this issue in recent years. By April of this year, at least 75 per cent of patients in Canada were receiving non-emergency surgeries within appropriate wait-time benchmarks.

If asked to single out an aspect of Canadian society superior to that of our American neighbours, most Canadians would cite first our health-care system. What I also might have mentioned were aspects of the American health-care debate that Canadians find puzzling, if not downright perverse. These include:

* The use of wildly misleading references to wait times in Canada even though 47 million Americans have no health insurance and, therefore, are forced to line up for treatment in hospital emergency rooms, to say nothing of the thousands who queue in parking lots across the U.S. to receive free treatment periodically provided by “Remote Area Medical” volunteers.

* U.S. opinion polls that show 77 per cent of Americans are generally satisfied with their health care when so many millions of their fellow citizens are uninsured and many millions more under-insured; when three-quarters of the families filing for illness-related bankruptcy actually have health insurance; and when insurance premiums have grown three times faster than wages between 2000 and 2008.

* The negative representation of Canadians’ experience with “socialized medicine.” That portrayal is at odds with reality. For example: 85 per cent of Canadians have their own primary care physician and 92 per cent would recommend that doctor to a relative or friend; 95 per cent of Canadians with chronic conditions have a regular place of care; of those requiring ongoing medical care most were able to see a doctor within seven days.

* The widespread use of an exceptional and misleading Canadian case. It involves a television commercial featuring an Ontario woman, who (American viewers are told) had to go to the U.S. to have a life-threatening brain tumour removed in order to save her life. Why? Because of a six-month wait time in Canada for treatment. The patient has since admitted to a three-month wait time involving a diagnosed benign Rathkes cleft cyst, the removal of which at a Mayo Clinic in Arizona cost her $97,000 that she is now seeking to recover from the province where its removal would have cost her nothing.

* President Barack Obama will address a joint session of Congress tonight in a bid to revive his faltering health-care initiative. From a Canadian perspective, the U.S. debate seems to have been shaped by the unfortunate conjunction of several factors:

* A political system that continues to be captive to special interests like insurance and Big Pharma companies, which spend millions of dollars annually lobbying against even small steps toward reform.

* A credulous American public, many of whom seem prepared to believe what appears to most Canadians as laughable propaganda from the right against any hint of advantage to be derived by patients from a public health-care system.

* The absence of impact on so many members of Congress of indisputable facts, including higher American spending on health care as a proportion of GDP (nearly 17 per cent) than any other OECD country government (in Canada it is 10 per cent), without securing the best health outcomes for its citizens. According to the World Health Organization, the United States spends 23 per cent more per capita on health care than Canada does.

* The fact that advocates of what to most Canadians is the best and only serious option – a single-payer system similar to the existing U.S. medicare system for the elderly and disabled – not only have not been given a decent seat at the table in this debate but have been deliberately excluded from any genuine participation by politicians of both parties.

The current U.S. health-care system and the opposition to meaningful and desperately needed reform strikes me (and I think I have lots of company among Canadians) as being as bizarre as American gun laws.

The latter likely is the second biggest difference most Canadians would cite between their society and that of their neighbours.

Alastair Rickard is a former executive with Mutual Life, Clarica Life and Sun Life and was the founding editor of the Canadian Journal of Life Insurance. He blogs at RickardsRead.com.