By David Nather for Politico – 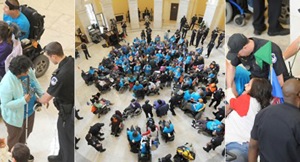 Capitol Police arrested 89 disability rights protesters late Monday for occupying the rotunda of the Cannon House Office Building in a demonstration against Rep. Paul Ryan’s Medicaid plan, which they said would force people with disabilities to live in nursing homes rather than in their own homes.

The protesters were arrested on charges of unlawful conduct — demonstrating in a Capitol building, according to Sgt. Kimberly Schneider, a spokeswoman for the Capitol Police.

The charge is a misdemeanor offense, and most of the protesters probably will be released unless they have other outstanding offenses on their records, Schneider said. The arrested demonstrators were being processed in the Rayburn House Office Building.

The protesters were from the disability rights group ADAPT, which filled the Cannon rotunda early Monday afternoon and refused to leave. They were protesting the House-passed budget resolution, which would turn Medicaid into block grants and reduce the program’s spending by more than $700 billion over 10 years.

Combined with other Medicaid cuts at the state level, the protesters said, the block grant plan could restrict funding so much that people with disabilities would not have enough public support to be able to live independently.

Ryan’s chief of staff, Andy Speth, met with the protesters Monday afternoon and asked questions about their concerns. It was mostly a civil exchange, though a few protesters shouted their complaints at him, one within inches of his face.

Other demonstrators took videos of the discussion on their cellphones, and some held protest signs, including one that read, “Block grants kill.”

ADAPT is known for occupying offices or public office buildings in its demonstrations.

Several Republican lawmakers, including Ryan, faced tough questions about the budget plan at town halls in their districts during the recess, though many constituents also praised them for having the courage to take on tough budget problems.